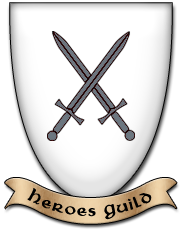 The Heroes' Guild is a professional confraternity dedicated to helping ordinary folks with their problems "best solved with violence" when it is impossible or inconvenient for the realm's regular militia to get involved. The Guild's charter, as granted by individual realms' rulership, allows its members to bear arms, and to intervene martially on behalf of innocent citizens, and are generally exempted from otherwise-compulsory military duties (though they may still volunteer for military service).

The organization is seen as an old-and-tired "hammer wanting for a nail" that isn't as necessary as it was in the days of the Old Empire. Members are generally treated with a cautious respect, as they still have the right (and in some cases, the tendency) to dispense violence, and a disregard for collateral damage, but are expected to keep their word, so long as the rules (or contract) are followed, and to come through reliably in a pinch.

Around 2000YA, as the Old Empire was at war abroad, and all the able-bodied fighting men were away, nearby barbarian tribes of all sorts were able to raid Imperial lands virtually unopposed. There would sometimes arise "peasant-heroes" from amongst those few that remained, who would fight the raiders. At one such time, a number of these peasant-heroes banded together to protect a town targeted by raiders, and through great personal sacrifice, saved the town from destruction. Emperor Genericus IV was so impressed with the bravery of this gathering that he granted them official charter to "defend the helpless" when the Emperor's own men could not. As other confraternities such as the Wizards' Guild and Merchants' Guild were coming into their own at the time, this new organization was dubbed the "Imperial Heroes' Guild." The Guild prospered and grew, in numbers and influence, over the following centuries. After the disintegration of the Old Empire in 1000YA, the Heroes' Guild continued to be recognized by the new nations that arose from its ashes. Although its official charter, to "defend the helpless," has never changed, the Guild's methods and practices have evolved to include bounty-hunting, crisis negotiation, monster-slaying, and getting the occasional stranded cat out of a tree. 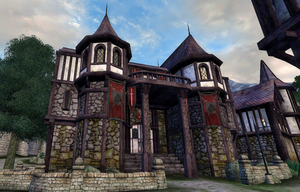 Guildhall of Heroes, at the Capital, Generica

The Guildhall of Heroes, the Guild's headquarters, is in the Capital, in Generica, run by the Grandmaster of the Guild, currently Válaris of Heroham. It is essentially a guildhall attached to a massive, well-appointed inn/tavern/pub where jobs are handed out and other business is conducted.

"We take up arms, so the people don't have to." Their overall goal is to promote peace throughout the realms of Imperia.

The founding members of the Heroes' Guild refused monetary payment from the townsfolk it had saved from the raiders, but they rather received payment in the form of "favors" granted by the individual townsfolk. This practice continued through the centuries, resulting in a complex relationship of trade in-kind between the Guild and its former-clients, evolving to include such trade in favors amongst the Guild's own members. Around 500YA, after having come to the aid of a Dwarven trade-colony, the Heroes' Guild was given a chest of mithral "coins," specially minted for the Guild, which the Dwarves had said were to represent their debt to the Guild: any Guildmember could redeem one of these special coins for whatever goods or services were required of the colony. The idea caught on with the Guild, such that it would later negotiate an exclusive contract with the Dwarves for the minting of future Guild coins, to be used to represent a "favor owed" to the bearer of the coin. Once a former-client has accepted a Coin as payment, the Coin is returned to the Guild, and the former-client's debt is cleared from the Guild's records.

These coins have no recognized value as "real" currency except amongst Guild members or clients. The Guild maintains tight control over the distribution and minting of Guild Coins, and what rules exist to govern their value within the Guild is a closely-guarded Guild secret; the Guild's privilege in such matters is granted by their charters. To this day, the Coins tend to find their way back to the Dwarves (who probably melt them down to make armor…or more coins).

The Guild encourages its members to form mutual-support-groups; it's good for the members' survival (usually), and members that survive become more valuable to the Guild. To that end, the Guild offers as a service the management of "Brothers-at-Arms" charter contracts. Such agreements are genuine legal bonds, sometimes for life, sometimes for a specific period, which are usually arrived at by a solemn oath or by sealed letters. Their terms normally provide that the brothers-at-arms should share equally in all gains of war, and should contribute equally to ransoms if one of them becomes a captive, though there are as many forms of contract as there are groups to swear to them. Once the details have been agreed to (the Guild can provide a number of "standard" contracts for members' use), the Guild administers (or has administered) any oaths and files away signed-and-sealed contract papers at the Guild headquarters for safe keeping.

Guild members who own lands or have sworn fealty to another lord are considered "courtesy" members. Such members can still be offered or seek out jobs from the Guild, but are exempted from any mandatory duties or expectations that apply to regular members (though "Guild Rules" still apply).

This category has only the following subcategory.

The following 10 pages are in this category, out of 10 total.