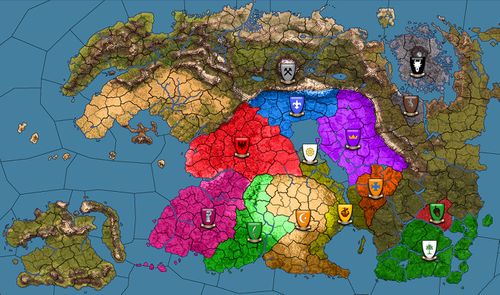 Fame & Fortune: is it all it's cracked up to be?
Family: How far would you go to gain/keep one?

Selfish squabbling over land and power vs creeping outside threat (Ref: GoT).

Loss of Jon Jr was the first domino to fall, making the dynasty appear weak, and forcing the king to start deal-making for a wife. The second domino was the "retirement" of Glyb Baylor, who was the glue that held the country together, and prevented the king from making bad decisions.

Nearly all realms that fall within the Imperia region are diglossic: speaking the common tongue for official purposes, or for foreigners, and their local tongue for casual or private conversation (and sometimes when cursing). In the realms of the non-human races, the population tends to speak its own language for all purposes, but are usually capable of also speaking Generic to foreigners. Non-human languages also tend to be more homogenous.

Days of the Week

(In the Pantheonist tradition, Fiday is a "fast" day and Senday is the gods' day)

Each month is 30 days long, except NewYear, which makes up the difference (typically, 5 days)

Years
Usually the Imperial calendar is used, counting the years since the collapse of the Old Empire; currently 1000 AE (AE=After Empire). On some formal occasions, regnal dating is used; in Generica, currently the 12th year of King Jon XVII

Rod
The rod is a historical unit of length equal to 5½ yards. It may have originated from the typical length of a mediaeval ox-goad.
Chain
4 rods (66 feet or 22 yards).
Furlong
(meaning furrow length) the distance a team of oxen could plough without resting. This was standardised to be exactly 40 rods or 10 chains.
Acre
four by 40 rods. An acre was the amount of land tillable by one man behind one ox in one day. Traditional acres were long and narrow due to the difficulty in turning the plough and the value of river front access.
Mile
8 furlongs
League
the distance a person could walk in an hour, most commonly defined as three miles.

The following 11 pages are in this category, out of 11 total.