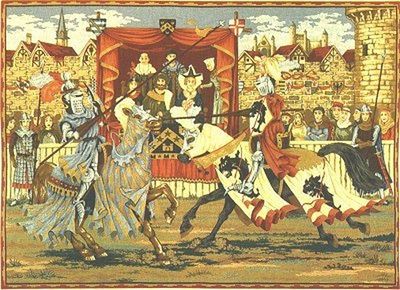 A tournament, or tourney, is a chivalrous competition or mock fight. It is one type of hastilude. These shows are held often for coronations, the marriage of kings, births, baptisms, weddings of princesses, conquests, peace, alliances, or to welcome ambassadors and people of great worth, or for pure entertainment. The heralds and kings of arms are in charge of publicizing the tournament, and the herald passes from castle to castle, taking letters and posters to the most renowned champions and inviting all the brave along the way.

Equestrian warfare, and equestrian practice, goes back to the Old Empire, just as the notion of chivalry to the rank of horsemen in those days; there may be an element of continuity connecting the tournament to the horse exercises of the Old Imperial cavalry. It is known that such cavalry games were central to military training in the post-Imperial kingdoms. In these early contests, the initial chasing and fleeing was followed by a general mêlée of all combatants. The melee was the main form of the tournament in the early days; the joust did not play the central role it would acquire later. The popularity of tournaments would come and go over the following centuries, and were periodically banned by the Pantheonist Church for their violence and occasional depravities (though those bans were rarely strictly observed). But they have experienced a resurgence in the last century or two, having evolved from their more brutal beginnings, moving towards pageantry and a predominance of jousting.

The "tournament" does not refer specifically to jousting. Jousting formed part of the tournament event from as early a time as it can be observed. It was an evening prelude to the big day, and was also a preliminary to the grand charge on the day itself. Jousting was occasionally banned in tournaments, as it distracted knights from the main event, and allowed a form of cheating. For example, a crafty knight might make a practice of turning up armed with his retinue to the preliminary jousts, and then decline to join the mêlée until the other knights were exhausted and ransoms could be swept up. But jousting had its own devoted constituency, and it began to have its own exclusive events outside the tournament. Increasingly, some noblemen were more interested in jousting than tourneying.

The license for holding a tournament is twenty crowns.

Tournaments might be held at all times of the year. The general custom is to hold them on Wondays and Tudays, though any day but Fiday and Senday might be used. The time and place of each tournament would be announced by messengers to the households and/or lords who were known to be interested a fortnight prior to the date of the expected event, and sometimes these announcements would also provide the composition of the two parties involved. Knights arrive individually or in companies to stay at one or other of the settlements designated as their lodgings. The day's events usually begin in the morning and last until dusk, and the overall tournament can span several days.

The fee a participant paid to enter was based upon his standing; an earl paid forty crowns, a baron twenty crowns, a landed knight eight crowns, and a landless knight four crowns. All tourneyers are required to take an oath before they set out to participate in a tournament. They have to swear to pay their fees in full on pain of arrest, to not endanger the peace of the kingdom, to pay reasonable market price for food and other necessities, to take nothing by force or unfairly, and to not breach the royal forests or impinge on the royal rights of vert and venison (that is, generally, the vegetation and habitat). Participation in the tournament is often restricted to nobility, to be confirmed by patent.

The tournament normally takes place in a field adjoining two settlements. Some kingdoms require that tournaments be held at a limited number of designated locations. The most famous tournament fields attract hundreds of foreign knights from all over Imperia for the tournament season. Outside the principal settlement, stands are erected for spectators. On the day of the tournament one side is formed of those 'within' the principal settlement, and another of those 'outside'. There are specified areas, recets, where a knight that has been unhorsed or captured can go to make arrangements for the payment of his ransom, or re-arm, or simply rest. In this area no one is allowed to harm any other. After a knight has made his arrangements for the payment of his ransom to the knight who has defeated him, he may return to the fight if he wishes. Sand is also sometimes spread over the tournament field to dampen the impact created when the knights are unhorsed and fall to the ground.

It is only in tournaments that are fought with bare weapons that ransoms and booty is taken. When a knight defeats his opponent, he takes the loser off the field and demands a ransom for his victory. This usually consists of the defeated knight's armor and horse, both of which are worth a large amount of money. The reckoning and collection of the ransoms taken during a tournament is done at the end of the day when the tourneyers call at the tents or abodes of the great lords. Any knight who believes that he has been mistreated or cheated of his ransoms or booty during the tournament can present his case to the lord of the offending knight and ask for justice. There are unwritten customs and rules governing the action of the knights at this time; some actions violate the codes of chivalric behavior and are not tolerated according to those customs. For instance, a knight can not take advantage of a disadvantaged knight, such as striking an unprepared opponent or taking a horse or booty from a knight who is not in a position to defend them.

Following the tournament the patron of the day offers lavish banquets and entertainment. There may be competitions to judge which of the lovely ladies can sing best, dance best, and love with the most feelings. Prizes are awarded during the meals.

By using costumes, drama and symbolism, tournaments have become a form of art, which has raised the expenses for these events considerably. They have political purposes, to impress the populace and guests with their opulence, as well as the courage of the participants. Loyalty to a lord or lady is expressed through clothes and increasingly elaborate enactments. Tournaments also serve cultural purposes. As the ideals of "courtly love" have become more influential, women play a more important role in the events. They are often held in honour of a lady, who often participates in the playacting and symbolism. Mythology and storytelling are popular aspects of tournaments. In Marinea, the military aspect of the tournaments is secondary to the display of wealth.

Winners are gifted precious jewels or pieces of art as prizes for performing the most valiantly in the tournament competition, or less often, they are paid in coin. The nature of these trophies can vary widly, but usually match the tournament's theme.

In contrast to the mêlée, the joust is fought between two individuals on horseback, in a small, defined ground known as the lists. The two would ride at each other from opposite ends, charging with a couched lance. In recent times, a barrier was introduced to keep the horses apart, to avoid collisions. More informal jousting events might have several horsemen within the lists at once, where each waits to take up the challenge of another, although the aim remains for the joust to be a one-on-one duel. Jousts are held for knights and squires alike.

There are several types of joust, including some regional preferences or rules. For some, the aim is to break the lance, and in others, knights sought to unhorse their opponents. These types called for different lances (light in the former, heavy in the latter), and saddles (where unhorsing called for saddles without front or rear supports, which would impede the fall).

In the Generic tradition:

The passage of arms is a type of chivalric hastilude that has gained popularity. It involves a knight or group of knights ("holders") who stake out a traveled spot, such as a bridge or city gate, and lets it be known that any other knight who wishes to pass ("comers") must first fight, or be disgraced. If a traveling knight does not have weapons or horse to meet the challenge, one might be provided, and if he chooses not to fight, he may leave his spurs behind as a sign of humiliation. If a lady passes unescorted, she may leave behind a glove or scarf, to be rescued and returned to her by a future knight who passes that way.

The challenge is a duel, on horseback, until one of the participants is unhorsed. If an unhorsed opponent will not yield, the other may dismount, and the duel continues on foot. (The knight on horseback may remain mounted, but this is considered dishonorable.) The duel continues until one side yields or is rendered unconscious.

A mêlée consists of knights fighting one another on foot or mounted, either divided into two sides or fighting as a free-for-all, armed in diverse manner, may try to throw their opponent to the ground, and the defeated must surrender his weapon (&c.), and can buy it back only in gold. The object is to capture opposing knights so that they can be ransomed.

On the day of the event, the tournament is opened by a review in which both sides parade and call out their war cries. At some time in mid morning the knights will line up for the charge. At a signal, a bugle or herald's cry, the lines ride at each other and meet with leveled lances. The two teams smash into the enemy, throwing them back or breaking their ranks. Those remaining on horseback turn quickly (the action which gives the tournament its name) and single out knights to attack. Squires are present at the lists to offer their masters up to three replacement lances. The mêlée tends then to degenerate into running battles between parties of knights seeking to take ransoms, and spread over several square miles between the two settlements which define the tournament area. Most tournaments continue till both sides are exhausted, or till the light fades. Some end earlier, if one side breaks in the charge, panics and runs for its home base looking to get behind its lists and the shelter of the armed infantry which protects them.

The winner of the mêlée will be either the army that held the field at the end of the day, or the one who had collected the most booty/ransoms, or in the event of no clear winner, the army selected by all those participating.

The quintain, also known as pavo (or peacock), includes a number of lance games, often used as training for jousting, where the competitor attempts to strike an object with his lance, sword or other weapon. The common object was a shield or board on a pole (usually referred to, confusingly, as 'the quintain'), although a mannikin was sometimes used. While the use of horses aids in training for the joust, the game could be played on foot, using a wooden horse or on boats.

A duel between two Knights, but rather than conducting three passes, each of the three duels will be fought until one Knight has received three solid blows from their opponent.