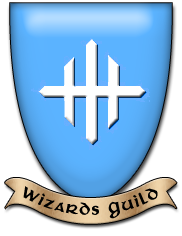 The Wizards' Guild is a noble order of magic-wielding protectors—united by their ability to use the Source—who have upheld peace and justice throughout Imperia for over a thousand generations. As keepers of the peace, the Guild undertakes diplomatic missions at the request of the kings of Imperia, and pursues dangerous criminals across national borders. In contrast to the Warlocks, the Guild's historic foes who harness the dark side of the Source, the wizards draw their power from the light side of the Source. The Wizard Code serves as the mantra of the wizards' way of life, governing the behavior of individual wizards to the philosophy and training regimen of the Guild as a whole.

"Well, the Source is what gives a wizard his power. It's an energy field the flows from the Otherworld. It surrounds us and penetrates us. It binds the Realms together."

Ruler: The Circle (13× Archmagisters)
Seat: The Spire, The Capital, Generica

Back to the beginnings of recorded history, before the rise of the Marisu Empire, before even the Druidic Order, magic-users sought the secrets of the Source, and would pass what they had learned of it to other magic-users when they would meet. Many of these early wizards stood with the Emperor against the encroachment of Evil™ around 3000ya, and were afterward afforded an exalted status in the Empire. As the guilds formed (2000ya), the wizards organized themselves into a guild of their own and were given official charter within the Empire to keep the peace and dispense justice, and would later stand as a secular balance to the Imperial Church. As time went on, Guild wizards began, one by one, to be seduced by secretly-returning Evil™ and manipulated their way into positions of power within the Guild. When their conspiracy was eventually discovered, those wizards were cast out of the Guild and dubbed "The Enemy," traitors to the Source, and the two factions struggled for power in a Secret War that would ultimately result in the collapse of the Old Empire (and the disappearance of the Imperial Isle) around 1000ya. The Secret War continued, waxing and waning, until the Nefarian Conquest of Mankind (100ya), when the Enemy joined the the Overlord's Black Army, and were defeated. All of the Enemy were believed killed and condemned to the Abyss, never to return; the Secret War was ended. But the Guild has grown self-obsessed, blinded by hubris to its own corruption, and heeds not ridiculous rumors of the return of Evil™ or its insidious influence within the Guild. 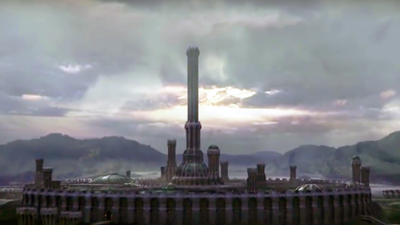 The Spire, Headquarters of the Wizards' Guild

Ranks and Forms of Address

The Wizard Code is a set of strict rules that governs the behavior of the Guild members. The Code has three main tenets: Self-Discipline, Responsibility and Public Service.

Foes of the Guild

Basically, heretics or apostates to the Guild's "religion"

The following 9 pages are in this category, out of 9 total.