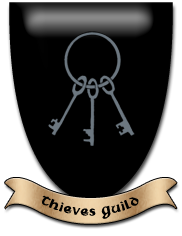 Nobody can just be a criminal in this town. If you want to rob, extort, embezzle, pilfer, plunder or otherwise take what isn't yours, you need to be a member in good standing of the thieves' guild. Common to fantasy stories, the guild provides protection to its members (and eliminates their competition) in exchange for a cut of their ill-gotten gains. Sometimes, the guild will extend to assassins and other criminals; others handle only larceny. Similar to The Mafia, but there is no competing group of outlaws, nor solo operators. If you so much as cut a purse and you're not paying dues to the guild, someone cuts your throat.

Usually there is a boss of the thieves, a King of Thieves, who gets a cut of the proceeds from any heist. Most guilds have layers of organization; depending on how many, the people doing the actual thieving may get a minority of what they actually steal (there is more than one way to take someone's money). Often, thieving is treated as a craft, and would-be members must go through an apprenticeship before becoming true guild members.

Often, the legitimate powers that be will turn a blind eye to the guild's dealings, as long as the members lay off certain targets (e.g. nobles). Sometimes, the thieves' guild is more powerful than the recognized authority. There could easily be a civil war if the balance of power shifts or the authorities want something, however. If more than one guild begins to operate in town, the fantasy equivalent of a Mob War can easily break out.

This category has the following 2 subcategories, out of 2 total.

The following 13 pages are in this category, out of 13 total.