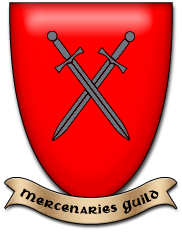 Mercenary groups first appeared 1000ya, after the fall of the Empire. These troops of seasoned mercenaries were organized and mobile, a valuable advantage during the battles of the time and were important elements of the armies of the kings of Imperia. As the kingdoms solidified into their current forms, there were intermittent hostilities punctuated by periods of truce, when soldiers would be laid off en-masse. In the absence of civilian skills and opportunities many, especially the foreign soldiers, formed armed bands and made a living by pillaging the countryside wherever they could until hostilities resumed—often requiring the Heroes' Guild to intervene. By the time of the Nefarian Conquest of Mankind, the bands had grown in size to the point where they had evolved an internal structure and adopted romantic names. The structure of Marinea, where a patchwork of rich city states were in a state of perpetual dispute with their neighbours, provided a need for better-organized, larger mercenary groups with their complements of cavalry, infantry and archers and complex internal structure, and the Guild was born. The companies made a good living by extortion or by contracting to fight on behalf of one city state against another. They would take on the “dirty jobs” the Heroes' Guild would not touch. They came to be known, in particular their leaders, as “contractors.” On several occasions the companies were contracted by different states to fight each other.

This category contains only the following page.