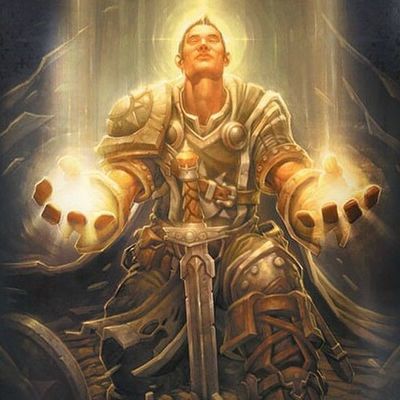 A paladin is someone who is chosen by one of the gods of the Pantheon as a champion, and blessed by his "Patron" with power, in preparation for becoming an itinerant monster-slayer and troubleshooter.

Nine-thousand years ago, as humans settled in Clichéa, they had to deal with a vast array of monsters that inhabited the land and which humans were poorly equipped to deal with. As the need grew great, each of the gods might choose (in their own way) a candidate, reflective of their own temperament, and make him into a magic-wielding warrior tasked to deal with the monsters on their behalf. In these early years, each of the gods would choose only one such champion at a time, replacing him only after his death. The need would arise more often as humans' domain expanded. The ancient stories tell of impossible, mighty deeds done by the Chosen of old.

The First Age of Paladins

As the Old Empire rose up, and human territory continued to expand across the continent, the gods began to choose more than one champion to cover ever-widening borders, and the paladins grew in number. As greater foes sometimes required cooperation, they eventually banded together into an informal "order." However, over centuries, a combination of the gradual taming of the wild lands, and the inevitable conflict between the champions on behalf of their gods' rivalries, eventually led to the Order's end when their numbers dwindled and they stopped gathering.

After the Order ended and the Imperial Church of the Pantheon rose in prominence, the Second Era of Paladins began, which paladins themselves refer to as the Golden Age of Witchers. The collapse of the Old Empire into new disparate kingdoms gave rise to new "monsters" of war, the Church stepped in and begged the gods to bring back the paladins. Partnered with the Church, their work became efficiently organized. Many were knighted by their host kingdom, and sometimes (strategically) landed by their rulers. Past tensions between the paladins calmed down and when paladins of opposed gods crossed paths, no blood was shed as each knew they had their own territory, making them treat other chapters more like estranged brothers than bitter enemies like before.

End of the Golden Age

In the century leading up to the rise of Evil™, the paladins had been too successful. Monsters grew increasingly rare and, due to decadence and corruption within the Church, fallen paladins, and the distrust of the rulers, the gods lost interest in the whole idea, and the number of paladins had diminished greatly. Many of the remaining paladins died in the war against the Nefarian conquest a hundred years ago, and only a few have been chosen since.

In general, a paladin is a formidable and often overwhelming opponent to more mundane races thanks to their superhuman physical prowess, and magic. However, they are but men, and vulnerable as any other.

This category contains only the following page.