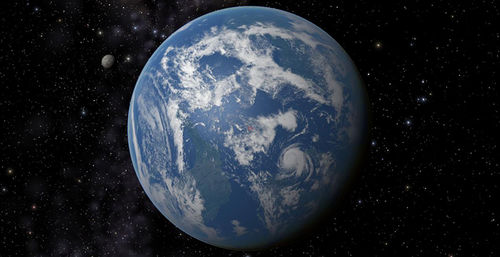 The fourth of six planets, Midway orbits Helene at 1.02AU. A generally earthlike planet with water covering 90% of its surface, in a single shallow ocean dotted with jungle-islands, much like Terra's Carribean or South Pacific islands (Ref: Far Cry, Just Cause 2, Lost). The planet is slightly smaller than Terra, and slightly more dense. Local gravity is 1.015G, close enough to Terra that one wouldn't notice the difference. It has a standard Oxygen/Nitrogen atmosphere that required little terraforming from the start. The climate is very hot, and has only minor seasonal variation. It has a 14hr day, and a 401 Earth-day orbital period (year).

It has a respectably-sized population, generally concentrated on the larger islands. Its capital is the city of Marilyn, on the island of Grand McCall (AKA Big Mac), which also serves as the System Capitol. Most space traffic is served by the Nelson Cove Spaceport on Grand McCall. The ocean serves as the home of much transplanted Terran marine life (which required only minor gengineering to adapt) as well as some native lower life forms. Considered by most to be a nice place to visit, but you wouldn't want to live there.

This category has the following 4 subcategories, out of 4 total.