Imperial Church of the Pantheon 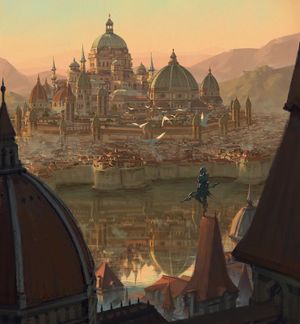 See the Pantheon
Unlike the old ways, whose worshipers are looked down upon by members of the Imperial Church as unrefined, the Faith is based on a number of holy texts and complex social rules. The central holy text of the religion is The Holy Scripture. The Faith of the Pantheon has an organized clergy with a complex internal hierarchy. Both men and women can be priests of the Pantheon.

The head of the Faith is known as the Pontiff, who resides at the headquarters of the Church of the Pantheon, the Great Cathedral of St. Paius, which is located in the Holy City in Ecclesia. It is a position of supreme authority within the church, but somewhat limited power outside of the religion, varying from region to region. Unofficially, the position does carry a high degree of social influence, though under weak Pontiffs the position itself is prone to manipulation by secular political leaders. An individual who becomes Pontiff is supposed to leave behind their original name when taking such a holy office.

The ruling council of the Faith is known as the Conclave, who meet regularly at the Great Cathedral. The Conclave is made up of the Heirants, who rank just below the Pontiff and are chosen from among the Archvicars of the Faith; they are responsible for electing a new Pontiff when the current one dies. The Pontiff is usually elected from among the Heirants themselves, though this is not an official requirement. In theory, the Conclave is supposed to select the Pontiff without outside interference. Oftentimes, however, powerful political factions or individuals can influence the Conclave to elect their preferred candidate.

Archvicars, the ecclesiastical equivalent of a duc, answer directly to the Pontiff, and are appointed from among the vicars within the archdistrict to oversee the others. Vicars are the ecclesiastical equivalent of an arl or conte, and rule the district from cathedrals in important holdings, overseeing the local patronships. Vicars and archvicars who are also sworn vassals to a secular liege are referred to as Lord-Vicar or Lord-Archvicar.

Patrons oversee the local village, town, or city churches. They preside over religious ceremonies such as weddings. They have taken vows of celibacy, and often take important positions in a noble's household, attending the local chapels at castles and keeps. In contrast, female clergy are known as matrons, also sworn to celibacy, sometimes serving noble houses as governesses and tutors to the daughters of lords, teaching them in matters of etiquette and history and activities such as sewing. Matrons dress in humble clothing, the color varying, normally a subdued shade, with their hair concealed.