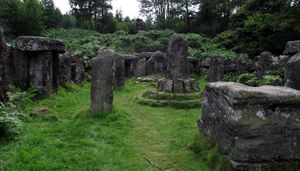 AKA The Elvish Cult of The Balance™
Ruled by: The Council of Elders (×7)
HQ: The Stones of Prophecy, Secret Location somewhere in the Elfwood
Tropes: Druid

The Druidic Order shares its roots, back to the beginning of the Known World, with the original Elvish worship of the Goddess of Nature; even now, the Order considers itself a natural extension and evolution of the Elvish religion. After the cataclysm that occurred 6000ya (now known only to the most learned of modern scholars), some priests of the Goddess, both Elves and Men, began to seek ways to prevent a recurrence by shepherding the developing nations, to preserve The Balance™, such that the conditions allowing the return of Evil™ would not be met. At the time, this was considered a heresy amongst the established priesthood of the Goddess, who were forbidden to interfere in foreign affairs—also, the potential return of Evil™ was not widely accepted as inevitable—and those priests were declared a cult. Over the millennia that followed, the Druidic Order established itself, spreading worship of the Goddess throughout the realms of Men. The Elvish priesthood eventually acknowledged the Druids as a legitimate offshoot.

The rise of the Marisu Empire brought with it a new religious organization of its own, which would become the Imperial Church of the Pantheon. This new, strange form of worship gained popularity across the Empire, enough to rival and eventually usurp the Order's place of prominence. With increases in its population over the centuries to follow, the "progress" the Empire brought to its lands included a steady spread of urbanization, which the Order believed to be a disturbance of the Balance™. The tendency of the Order's priesthood to eschew the wearing of metal became a symbolic defiance of the trappings of Imperial progress, while to non-adherents, it became a symbol of the Druids' refusal to adapt to the changing environment. These times also saw the beginnings of the Rangers, a more "martially-oriented" membership of the Order created to protect the wilds from ever-increasing banditry and over-hunting.

In modern times, the priesthood of the Order has dwindled, as has their public influence, though their Elders are still greatly respected by both Men and Elves. It is considered praiseworthy to have a Druid in one's court, as their wisdom is legendary, though that Druid must inevitably serve beside his Church counterpart. Druids are also highly sought after for fast delivery of messages over long distances, through their ability to employ small animals as carriers—a regular source of income for the Order and its membership.

Yet the apparent decline of the Order masks the truth, that they are no less active toward their purpose to maintain the Balance™ at any cost. They pull the strings of the great powers from the shadows, pruning here and watering there. When they can't manipulate, they employ spies, and sometimes saboteurs, fund rebellions and bandits, provoke barbarian raids. Even the truly "good" are not safe from their machinations, for an excess of power, even in the best of hands, could upset the Balance™.

The most sacred location for the Order is The Stones of Prophecy, the location of which is a closely-guarded secret; this is the meeting place for the Council of Elders. There are also sacred groves—the Druids' equivalent of "temples"—all over Clichéa; some are kept secret, but most are not. Any who wish to worship the Goddess at a sacred grove, or just seek a Druid's counsel, are welcome at sacred groves.


The Rangers are part of an ancient tradition of wilderness warriors who ceaselessly patrol the boundaries of Clichéa. They are by necessity skilled with the sword, bow, and spear. They are grim in life, appearance, and dress, choosing to wear rustic green and brown. The Rangers admit all races into their ranks, though Elves are the most common among them, and speak Elvish in preference to the Common Speech. They are led by the Council and charged with protecting the the land from monsters and evil peoples, and to preserve the Balance of Nature. It is less commonly known that as they rise in rank within the Order, they begin to wander farther from the Elfwood as directed by the Order and report back what they see, and are occasionally charged to perform other tasks, though they may not know the purpose—they are the eyes, ears, and sometimes fists of the Council.

Elves live naturally for thousands of years, but Men do not. Yet somehow, Druids have found a way to extend their own lifespans—magically, no doubt—such that even Druids who are Men may live for thousands of years, or perhaps never die at all—who but the Elves are old enough to say? This has an effect on recruitment and ranking amongst their members; only Priests who are at least a thousand years old may be accepted into the Council of Elders (although other long-lived individuals may remain Priests).

The Order has a language of its own, complete with a sort of "sign-language," referred to as "Druidic." The language is related to Elvish (a distant dialect, perhaps), though different enough that someone fluent in Elvish would not understand it. This language is only taught to members of the Order, and is utterly forbidden to be passed on to outsiders.

Identity of the Elders

No one knows for certain what the Elders look like, for it is said that the oldest among them can change their face at will, and never show their true faces to any but the others on the Council. In fact, one can't be certain that any Druid shows his true face to anyone, though the younger ones are more "consistent" in their appearance.